In the afternoon of Valentine’s Day, 1900, about an hour from Melbourne, Australia, a group of schoolgirls and their teacher vanished while on a field trip to Hanging Rock. Numerous rumours relating to their whereabouts have been whispered yet the mystery of what happened goes unsolved.

The beguiling story is being retold in a six-part TV miniseries based on Joan Lindsay’s classic 1967 novel Picnic At Hanging Rock, which was made into an unforgettable feature in 1975 by director Peter Weir.

Lindsay did little to dispel the myth that the story is based on truth, refusing in interviews to confirm whether her novel was fictitious or based on fact. Either way, it’s a mystery that has haunted public interest since 1967.

Before the 19th century colonization of Australia, traditional Aboriginal owners lived around Hanging Rock for over 26,000 years, gathering there for important meetings and tribal ceremonies. Many were killed when they were forced from the area leading to beliefs that spiritual forces of nature remain. In the book No Picnic at Hanging Rock, author Helen Goltz reprises a theory that Aboriginal spirits were responsible for the disappearance.

Etching by William Blandowski during his 1850s expeditions into central Victoria, Australia

The narrative has been widely considered as a dramatisation of some fateful real event. Searching for answers in her book Beyond the Rock Janelle McCulloch studies a similar expedition in 1919 by students from the school that Lindsay attended in which several girls disappeared in the same secluded outback, presumed by authorities to have been abducted by local degenerates, thus explaining where Lindsay got the story from.

On their journey the girls casually climb up Hanging Rock barefoot with relative ease. At this point in the novel, “Irma was aware, for a while, of a rather curious sound coming up from the plain. Like the beating of far-off drums.” Could this sound be tumbling rocks that lead to the group getting trapped? The search party later on climb through the same location with great difficulty – perhaps a result of new boulders blocking the path.

Might the mysteries of the story stem from a traumatic event kept secret by the author? The lead role of Miranda, played by Anne Lambert, recalls in an ABC interview Lindsay’s strange behavior on set. One day Lambert wandered off by herself when the author clambered over to her, “put her arms around me, and said in a very emotional way: ‘Oh Miranda, it’s been so long!’ She was shaking like a leaf…. it was clear she’d regressed into some part of her past. To her, I really was someone she had known, somewhere in time.”

This theme runs throughout: The defiant orphan girl Sara commits suicide; head governess Mrs. Appleyard kills herself by jumping from Hanging Rock. Striking similarities emerge between the movie and Sofia Coppola’s 1999 film The Virgin Suicides. Each present their central characters as both victims and triggers of tragedy. It is possible that the schoolgirls planned their fates collectively in retaliation to the repressive oppression they were subjected while at boarding school and in Australian society. 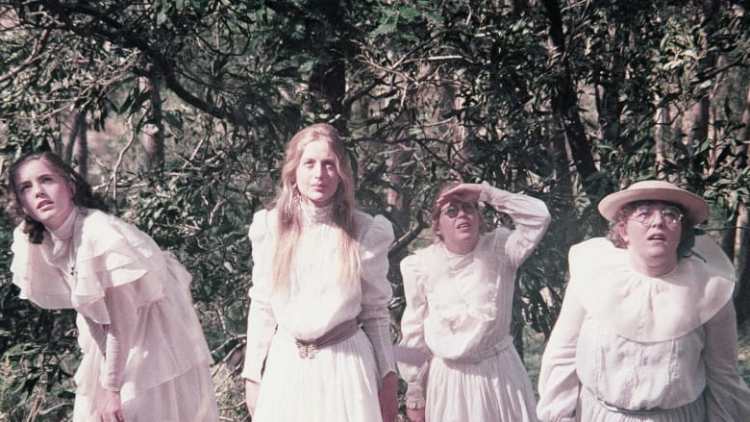 Before Lindsay’s book was published her editor suggested that the final chapter be cut. It is written in these last twelve pages what really happened to the girls that day. The missing chapter was published after Lindsay’s death in 1984 as The Secret of Hanging Rock that concludes with the party entering another dimension through a time warp, never to be seen again.

Our desire for answers as viewers is an integral part of movie viewing. When this unwritten right isn’t satisfied it brings about confusion and intrigue. Picnic At Hanging Rock leaves so many questions open. The only definitive answer the author gives us in the book is still as ambiguous as ever: “Thus the College Mystery, like that of the celebrated case of the Marie Celeste, seems likely to remain forever unsolved.”

7 Deadly Things is a non-profit website. Copyright infringement is never intended. If there is anything on this site you wish to be taken down just get in touch and we’ll sort it out no problem.

This site uses Akismet to reduce spam. Learn how your comment data is processed.